Welcome back to another installment of LRM’s Retro-Specs! I may be biased, but no other cartoons can compare to those from the 80s. They are on a completely different level. While there are numerous cartoons deserving coverage, I am going to focus on one well-known cartoon, and two other similar cartoons that many feel are in the same universe. Hit the play and record button on the VHS at the same time and lets take a look back at ThunderCats, SilverHawks and TigerSharks!

Saturday mornings were a coveted time that we would look forward to with anticipation. Each 80s weekday also boasts their own strong cartoon representation in the block of time after school. Remember, these were the days before streaming, unlimited channels and On Demand. You would have to crack open the TV Guide and possibly set the VHS to record if you might miss a show. Out of tapes? How about the old family vacation? Tape over it. Priorities. If something worked in the 80s, you could bet you would find something similar to follow. Think of all the different renditions of TMNT (we will leave that for another Retro-Specs column).Let’s take a look back at ThunderCats, which is considered lightning in a bottle for the time, and the follow-ups of SilverHawks and TigerSharks spanning the 80s!

ThunderCats is the cartoon most will remember fondly. Rankin/Bass Animated Entertainment struck gold with the characters created by Ted Wolf. In 1985, ThunderCats debuted with Lion-O, Cheetara, Panthro, Tygra, Snarf, and WilyKit and WilyKat. Due to the demise of their home planet, Thundera, the group end up on Third Earth.

The producers enjoyed the idea and moved forward with the project. The series was animated in Japan by the company Pacific Animation Corporation (PAC). The story was sent to Japan where it was then animated and sent back to the US. It became an enormous success. I have gone back and watched the seasons, and am not sure how Mum Rah’s transformation didn’t scare the crap out of me as a kid. He’s still pretty terrifying!. 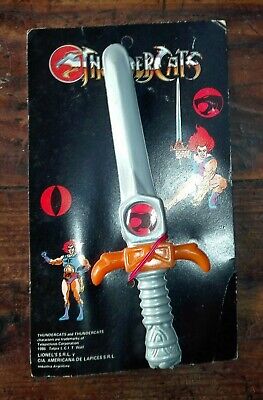 The ThunderCats are awesome. And that is a huge understatement. The toyline was badass as well. I had the Sword of Omens and some of the characters (including Snarf). The vehicles were out of my grasp because they are a bit pricey. I do also remember my ThunderCats sleeping bag and tent that I would put up in my room. It took the place of my Dukes of Hazard tent.

Here is the question: Who had the best weapon? The Sword of Omen is an easy choice, but Tigro had that sweep whip and Panthro had some awesome nunchucks. You know you have a hit when main stream fast-food chains pick you up for a tie-in. Of course I had the power ring, cup, and best of all, the light switch cover! It also glowed in the dark and was on the light switch in my room for many years (until my dad said I was too old to have it on there.) For all of its success, the show ended in 1989. Luckily, if you are a fan who misses the show, it can be found on Hulu! With the success of ThunderCats, Rankin/Bass and Lorimar Telepictures decided to take what works and repackage. A year after ThunderCats aired, the companies decided to take the focus off land and move it into space. On January 1, 1986, SilverHawks first aired. There are some similarities between the shows. Unfortunately, SilverHawks did not enjoy quite the same success as its predecessor, but deserves more love!

So not quite the same universe per say, SilverHawks takes place in the 29th century. They police the galaxy around Limbo. The ThunderCats are felines, but the SilverHawks are cyborgs. Their primary adversaries are Mon Star (kind of like Mum Rah). Mon Star’s henchmen were great. They kind of reminded me of Mega Man villains. Buzzsaw was exactly as he sounds, and reminded me of Metal Man mixed with Shredder. But, Buzzsaw came first! Molecular is a shape shifter while one of my favorites is still the bull, Mambo Jumbo. What a great name as well! The cyborg police consists of the leader, Quicksilver, twins Steelheart and Steelwill, badass with a guitar and tech guy/pilot Bluegrass, and the whistling Copper Kid. I always liked Copper Kid because I was really young when SilverHawks came out and always wanted to be him. Random, but Copper Kid came from the Planet of Mimes and was the reason I wanted to learn how to whistle. See how good of an influence 80s cartoons are? Hotwing, Flashback, Moon Stryker, and the retired Condor would later join the team as well. Bluegrass was awesome and wore a cowboy hat, yet played rock n’ roll music. I always felt bad for him because he was the only one who couldn’t fly, but he was the pilot of their ship, the Maraj.

Like most 80s cartoons, the show came with a usual-type public service announcement, which is a good thing! Unfortunately, the show would only last one season. It did air after school and followed ThunderCats at times, which gave us 65 episodes. 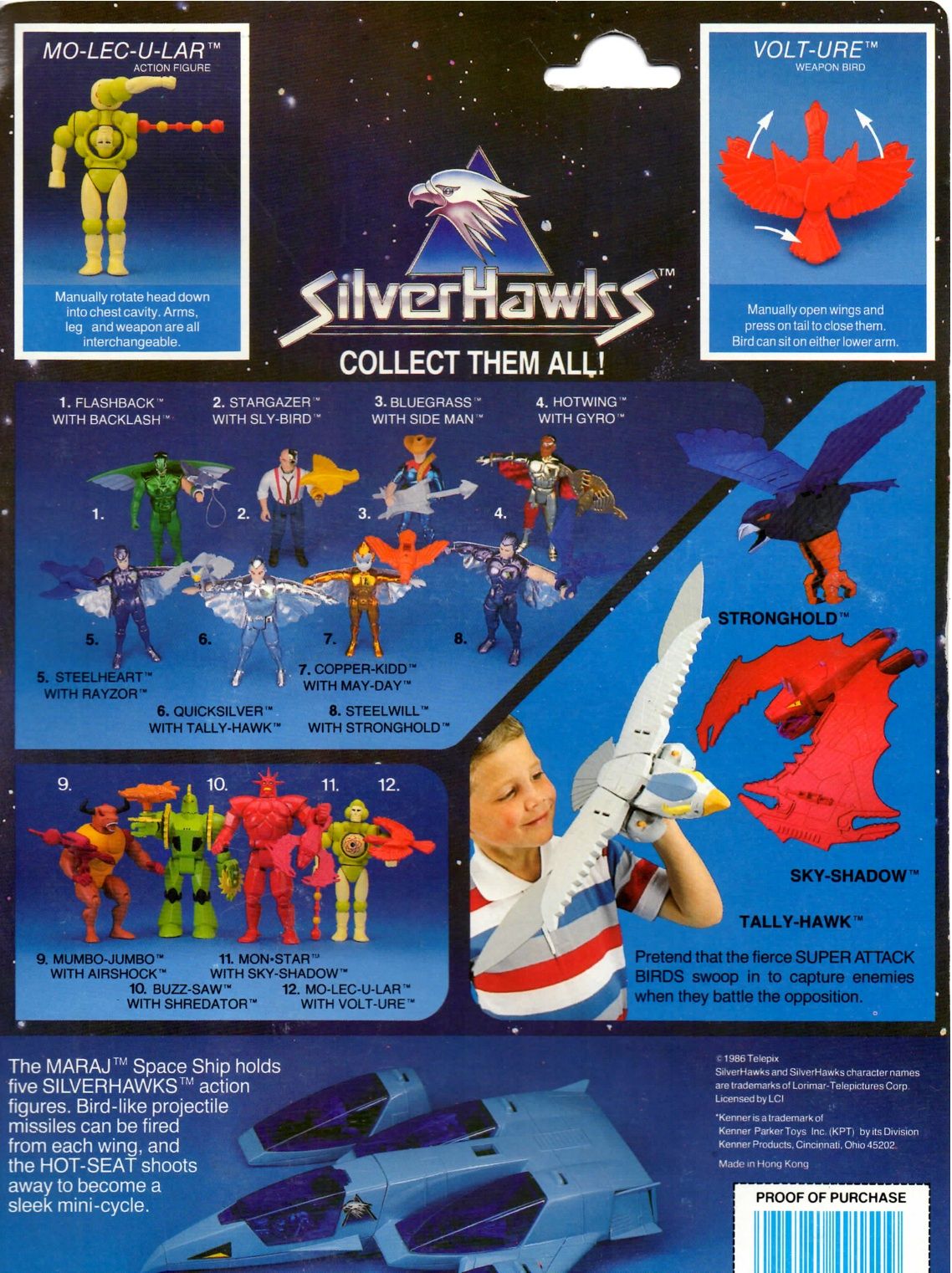 While the show did not get as much love as ThunderCats, it did have some amazing toys. I had a good majority of them. I loved how each character came with their hawk. The villains were bulky and huge while the heroes were sleek and chrome-like shiny. You could press their legs together and their arms would open ready to fly into action! Even though the series was not as popular as ThunderCats, it did also receive a comic book from Marvel/Star Comics as did ThunderCats.

While the ideas of a shared universe were not as common place as they are now, SilverHawks would more than likely be connected to ThunderCats and the next cartoon we will be talking about. ThunderCats has seen many revivals, but I think we are all ready for the SilverHawks to fly back into our lives. SilverHawks is currently on Amazon Prime. And while you watching, be sure to check out Dark/Web!

This one may be the most obscure of the bunch. ThunderCats and SilverHawks usually appeared one after the other during the after school hours. TigerSharks is different. The show was part of a four-show series known as Comic Strip. It took the idea of an actual comic strip, but brought it to the small screen. If they wanted to reflect comic strips from the newspapers, they succeeded. The shows could not be more drastically different, much like going from one comic strip to the next. Street Frogs, The Mini-Monsters, and Karate Kat could be seen in addition to TigerSharks. The intro. for TigerSharks was catchy, but so was the overall intro. for Comic Strip.

Rankin/Bass thought they would give it another go to try and replicate the success of ThunderCats. They already covered land and space. This time they would move to the sea. Worst case scenario you at least sell some toys like SilverHawks, right? Not exactly. I personally loved TigerSharks and found it extremely interesting.

This show receives almost no love to this day. While ThunderCats and SilverHawks can still be viewed on streaming platforms, TigerSharks has not been released since it ended. Beginning in 1988, the show only had 26 episodes and was on its way out by 1989. The story centered on Water-O, which was far from earth. Mako is the leader of the TigerSharks with Doc Walro, Octavia, Dolph, Angel and Bronc, and Gup, Doc Walro’s pet. 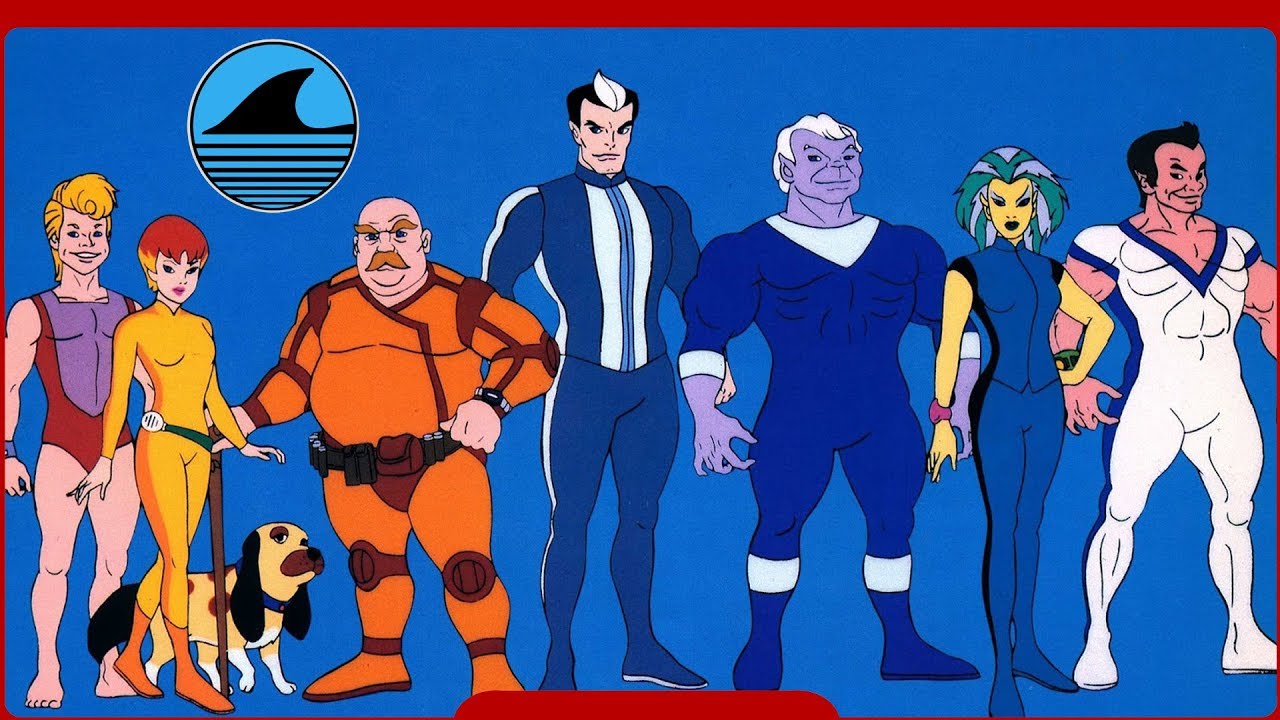 While the ThunderCats and SilverHawks did not completely change forms, this was not the case for the TigerSharks. This was the part that I actually find the most interesting since it was so different from its predecessors. Doc Warlo had the Fish Tank which allowed each individual to obtain the characteristics, abilities, and looks of specific aquatic creatures. This made them a human/fish hybrid. The team looks to protect the Waterians while fighting their under water foes, the Mantanas led by T-Ray, and Captain Bizzarly and his pirate crew. T-Ray and Captain Bizzarly join forces with the goal of taking over the Waterians.

These character changes were awesome! My favorites were Mako who turned into a mako shark and Octoavia who turned into an octopus hybrid. The team complemented each other like the previous squads mentioned. The difference here was that their unique character differences revolve around the specific aquatic creature they represented. I felt that this gave the characters more depth as their personalities and aquatic abilities complemented each other, which strengthened the team. There unfortunately is not a good deal of merchandise for TigerSharks. Toy giants Kenner made the SilverHawks toy line. However, if you are a fan of the Angry Video Game Nerd, you will know of his disdain for the company LJN. While I agree that many of their NES games were awful, they did in fact create the ThunderCats toy line. They would then come back to create the TigerSharks toy line. In the late 80s, there is an extremely slim amount of toys hitting the market. There are some playsets and vehicles that never end up seeing the shelves of stores. I do have a few toys such as Mako and Capt. Bizarrely. Aside from a brief appearance in the 2011 ThunderCats reboot, TigerSharks have rarely seen the light of day since 1989. Not even in DVDs, or mainstream streaming platforms, which is unfortunate. I know it was such a limited series, but would love to have access to those 26 episodes. I think what possibly hurt the show was that it was not a feature of its own, but connected to Comic Strip. Now don’t get me wrong, I am a big fan of Comic Strip. However, I feel that making the show a standalone from the others is key to having more success. 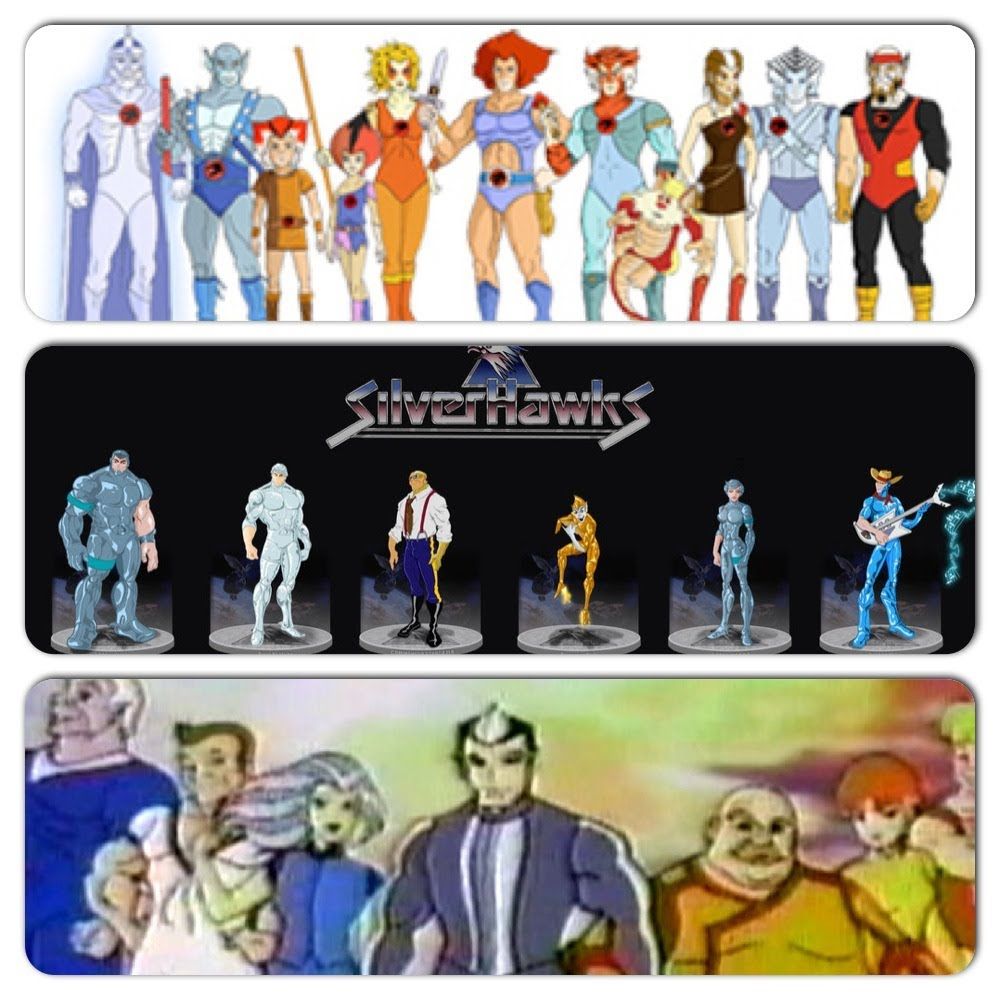 Let’s rank all three shows in the following categories, toys, intro. song, characters: here is what I have. (Let the hating begin).

It would be awesome if they could bring all three shows together for release. Especially in the age of nostalgia. The three shows even shared the same voice actors: Larry Kenney, Peter Newman, Earl Hammond, Doug Preis and Bob McFadden. With all of the similarities between shows, and shared voice actors, producers, etc. the path is made for the current idea that the three shows could share a universe. I don’t know about you, but I think now would be a great time to explore that!

What are your thoughts? Do you remember all three shows? Which was your favorite and why? What toys did you have/wish you had? What do you think about brining the shows together? Leave your thoughts in the usual spot, and thanks for reading!