Welcome to LRM’s Retro-Specs! This is going to be the first installment in the series. Each month we will be looking at movies, TV shows, games, toys, and other miscellaneous concepts. Get ready for either a trip down memory lane or we may uncover a forgotten hidden gem from days past! This month we will take a look at 1980-1984 with our first stop being a film that truly changed the action genre: 1982’s First Blood. 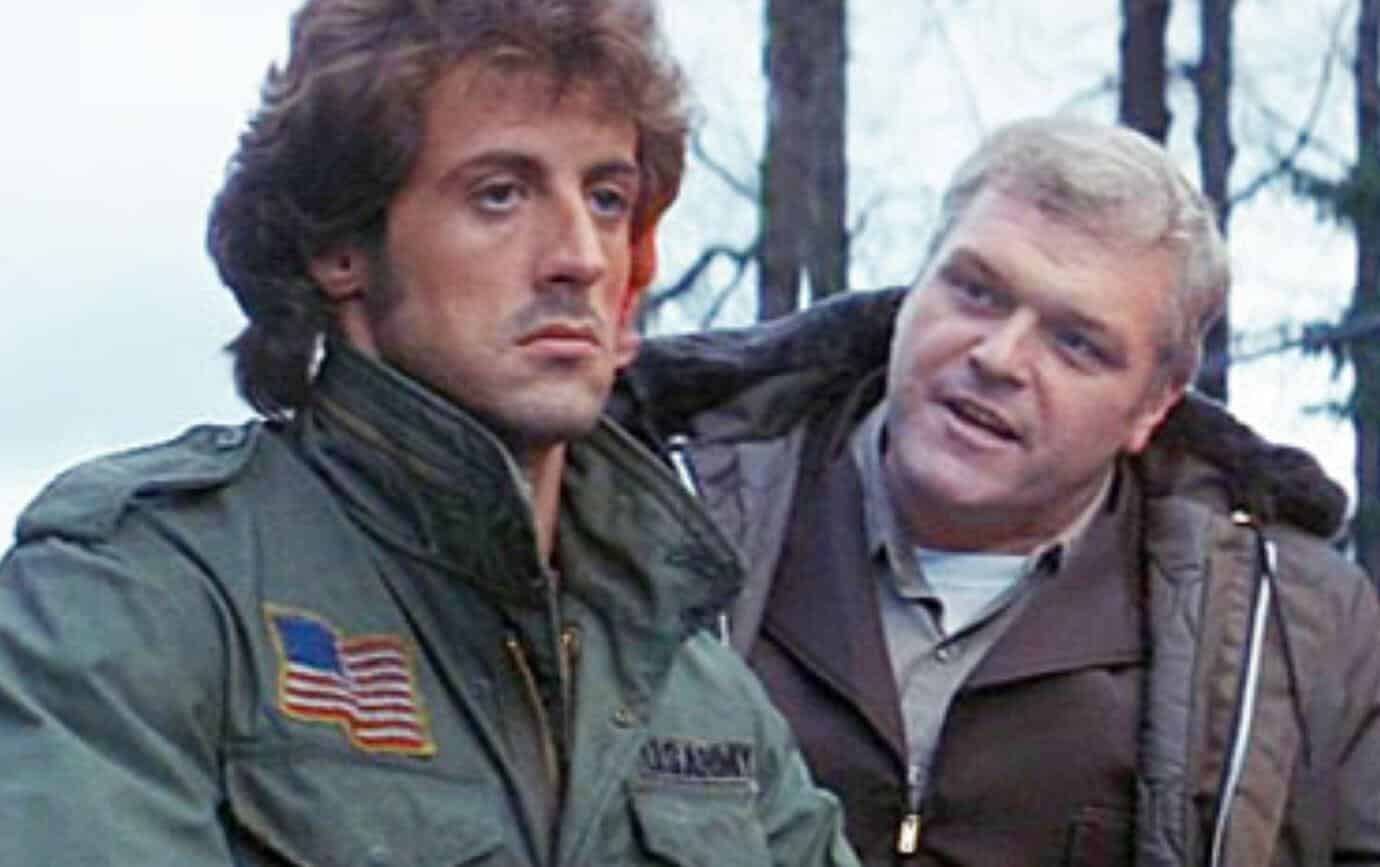 First Blood made its way to theaters on October 22, 1982, on a budget of $15 million while bringing in over $125 million. Clearly a success at the box office, the Rambo franchise was born changing the action genre. Some of the changes are still seen today while others were short-lived, but for the time, First Blood changed the action genre.

Action heroes were often depicted as being on a different level, above the average human. The introduction of the character John Rambo presents viewers with an “everyday” protagonist. While his skill set is above the average individual, Rambo is still presented as a relatable person. It was as if he could have been in anyone’s community. In most situations, an individual taking down the local sheriff and destroying a town would not be considered a hero per se. The character development and story arc are what lead us to root for him (more on this later). John Rambo is returning from the Vietnam War to a new world and trying as best as he can to navigate it. Because his story is relatable, or sympathetic, fans find themselves rooting for him rather than the sheriff and community.

First Blood changed the action genre by making the way for other relatable protagonists to succeed in the ’80s. Some of the notable individuals include Axel Foley (Beverly Hills Cop), John McClane (Die Hard) and Martin Riggs/Roger Murtaugh (Lethal Weapon) to name a few.

From the onset of the film, viewers can see the unfortunate reality that so many veterans face. Vietnam is viewed much differently than other wars. A 2017 Entertainment interview with director Ted Kotcheff sheds light on the idea. He feels that wars prior to Vietnam created a response with parades and celebrations. In contrast, Vietnam veterans arrived home to rejection. Veterans who fight for our freedom came home to a completely different world, which would never be the same. They also lack a necessary support system, which is apparent in the film.

Five minutes into the movie, Rambo meets his antagonists. The film introduces the setting of the small community of Hope, Washington and Sheriff Teasle (both acting against Rambo). He is immediately classified as a drifter who is not welcome. This is the unfortunate reality of many veterans. The lack of societal help for returning veterans cannot be ignored with this film. This focus goes beyond the typical “hero saving the day” format of most action movies prior to First Blood.

After being arrested for walking back through town, Rambo’s bouts of PTSD come to light putting him in survival mode. This leads to yet another way the film changed the action genre.

This is the story arc that defines the film and connects to the everyday protagonist also breaking the traditional action genre. The movie opens with John Rambo home from the Vietnam War looking for his fellow Green Beret, Delmore Berry. Unfortunately, Berry’s exposure to Agent Orange gave him cancer, which led to his death. This is within the first five minutes of the film and is crucial in creating the focus on mental health. The dejection on Rambo’s face speaks volumes and sets the tone of events for the remainder of the film.

PTSD plays a constant role in the film. The community and sheriff parallel the villains he encountered in Vietnam so he did what he knew: survival. The culmination of this comes at the end of the film. The ending is drastically different than other action films prior to First Blood. I remember watching the movie and Rambo, the action star, was crying which strips away the false idea that “macho” means lacking emotion. This merges the action realm and grounds it in reality.

The original script actually ends with Rambo committing suicide. This is again an unfortunate reality of so many of our returning heroes. In the same Entertainment interview, director Ted Kotcheff spoke about his original idea. Although the original concept was for this to be Rambo’s tragedy there was an eventual change. Sylvester Stallone states that Rambo is dealt with enough hardships and that it should not end with his death. Kotcheff agrees and also felt that it would appear as if the town won, but this was Rambo’s story. He had already been through the war, PTSD, and now the loss of his friend, rejection from society, abuse by police, being hunted, freezing in the mountains, dogs chasing him, etc.

The confusion, worry, fear, and isolation expressed from Rambo in the final scene is so real which made this much more than a typical action movie and brought attention to a taboo subject for the time. Unfortunately, so many of the issues Rambo encounters are still occurring for our military heroes today.

First Blood would lead to numerous sequels that would deviate from the original concept. I am aware that a majority of the Rambo franchise merchandise reflects the sequels rather than the original. However, we would have never got to this point without First Blood! So how did the Rambo line change the action genre? Toys and merchandise were not new concepts in 1982. The type of merchandise however was different for films that carried the R-Rating.

Picture it: It’s the ’80s, you are in elementary school and are pumped to make your way into the cafeteria. Scanning around, you are looking to trade your oatmeal cream pie for a Squeezit or some Gushers when someone walks in with the Rambo lunchbox and thermos! You know not to mess with them. They are a badass. Why? On the tin lunch box, Rambo is holding a freaking rocket launcher / machine gun combo with the thermos sporting an arrow coming your way. First Blood led to the mainstream incorporation of violent toys and merchandise connected to violent action films. 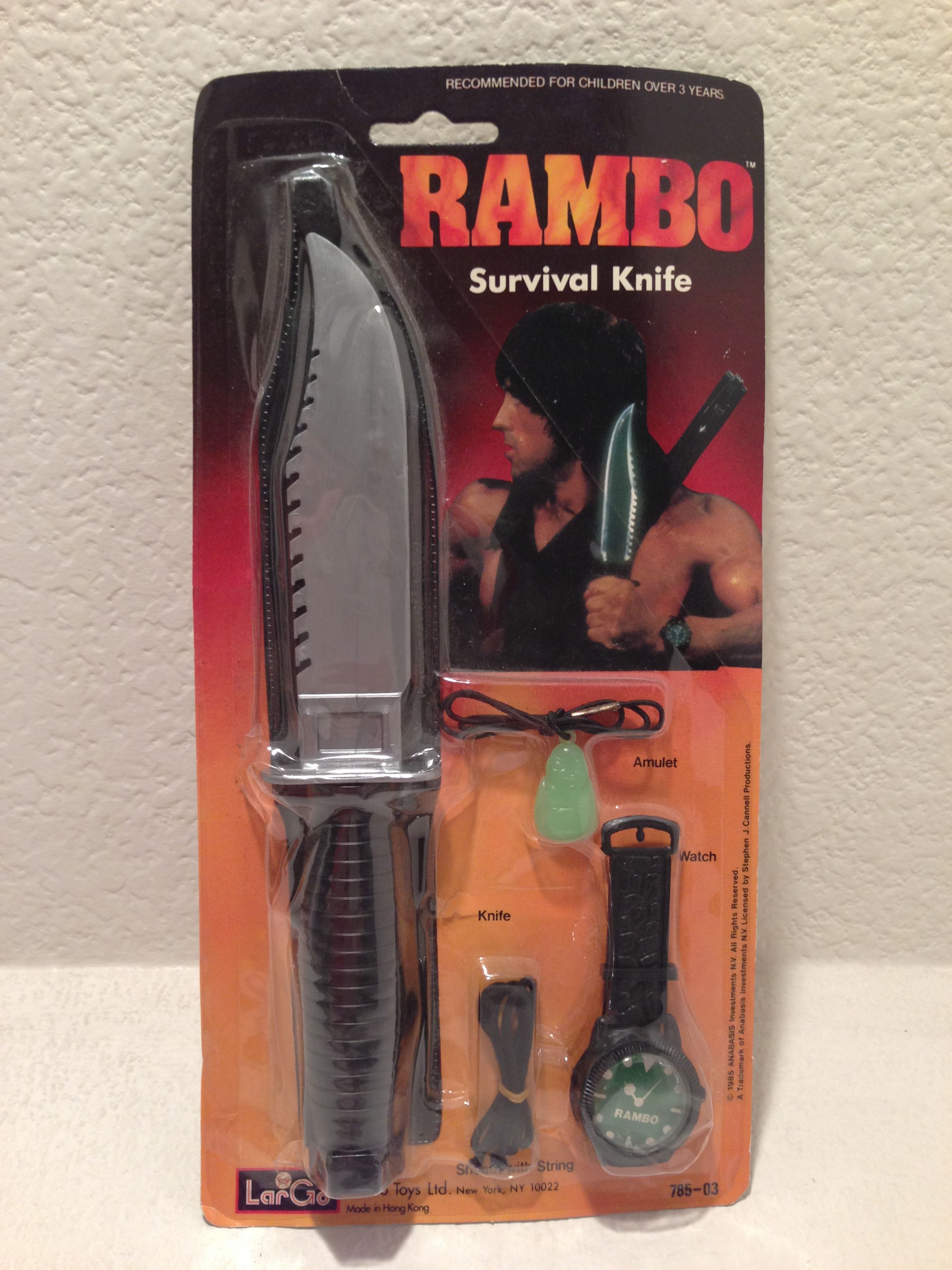 I definitely own this hunting knife, watch, amulet set. Don’t you love how the recommendation is for children over three?…three. Kids (including me) may have barely been able to read yet, but I could take this knife to the woods or playground and become Rambo taking down terrorists! There is another set that contains not the only the knife but a gun, grenade, and compass.

The acceptance of weapons reflecting R-Rated films would quickly change again almost a decade later. Films such as Teenage Mutant Ninja Turtles and Batman Returns rank among those not having kid-friendly toy lines. This eventually happened with the popularity of Power Rangers, too. The Turtles and Power Rangers had to meet a reduced weapons and action requirements due to parent outrage.

First Blood changed the action genre through accessibility and acceptance of violent merchandise  connected to R-Rated films. For Rambo, its toys and merchandise were made to reflect the film. Another eventual shift in the action genre would make films adapt the movies to fit the toy line. 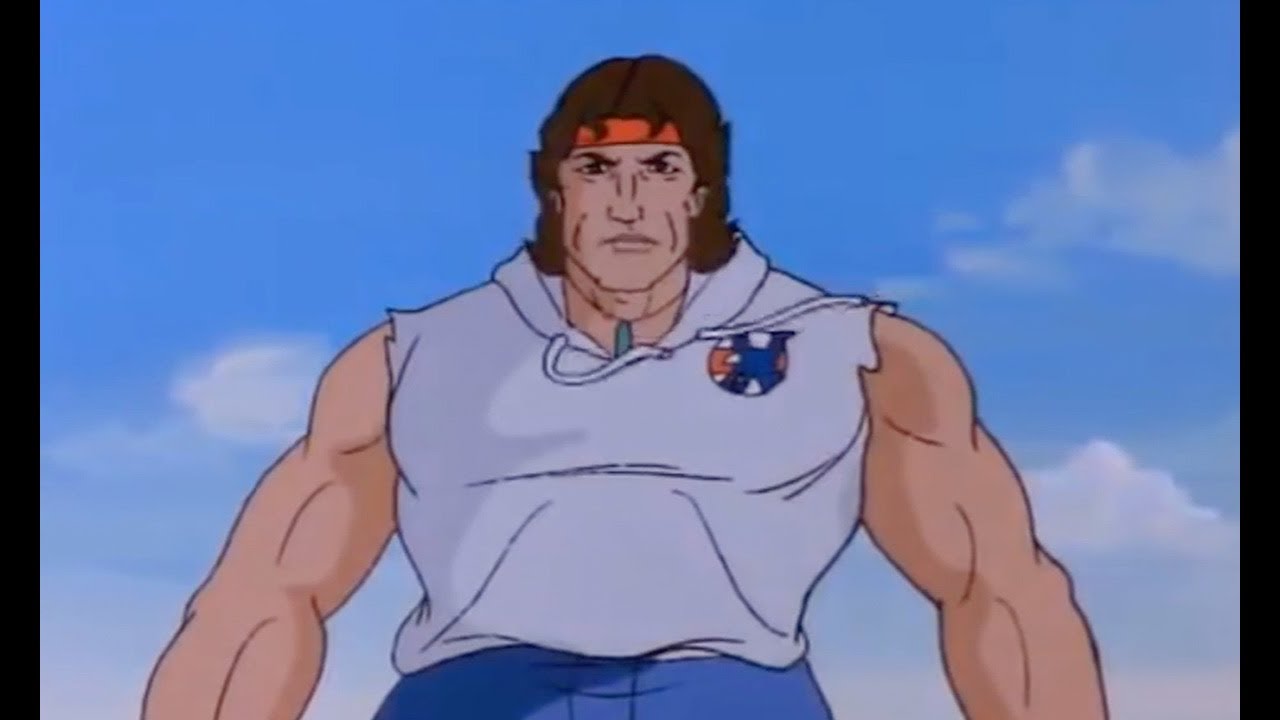 The concept of a film having a corresponding cartoon is not new either. What made a Rambo cartoon unique was that it once again began from violent R-Rated films. Rambo: The Force of Freedom hit the air in April of 1986 and only made it until December of 1986.

Why the short lifespan? Well, the cartoon was the first to be an adaptation of an R-Rated film series. Even though the terrorist organization (S.A.V.A.G.E.) and countries were fictitious, controversy still occurred. After all, John Rambo being a Vietnam Vet with PTSD demolishing terrorists was difficult to gloss over in cartoon form. It still made the light of day which would not happen by today’s standards.

At first glance it is easy to compare First Blood with the other action movies of the ’80s. However, once you dig deeper it is actually a film that changed the action genre in some ways that are no longer present, but made the way for the realistic, everyday hero that can still be seen today.

Is there a movie between 1980-1984 that you would like us to discuss? Do you think First Blood changed the action genre? Did you have any of the toys or merchandise? Also, check back next week for the second installment of LRM’s Retro-Specs where we shift the 80-84 view to TV. More specifically, let’s go back to a time of Reading Rainbow and Book-It!